We’ve invited some of the top performers and fighters from around the world to give you best-in-class training opportunities for the widest possible range of disciplines.

GUESTS OF HONOR AND FEATURED INSTRUCTORS

We’re always working to bring the biggest and brightest stars in the martial arts and stage/screen combat world to you at CombatCon. Our Guests of Honor have achieved special renown in their field and are known the world over for their ability to extract the highest level of achievement from their students. David started his carrier in the entertainment industry in 1980 when he moved to LA. Working in film and television productions such as Grease 2. Crime Story, Call to Glory and a daytime TV show. Throughout this time his study of the martial art grew to include the sword.

While teaching theatrical combat in the early 90’s David began to build weapons for use in class and stage productions. This soon led to the opening of his prop business The Hollywood Combat Center, a prop company focused on historical and fantasy bladed weapons. Those weapons have been seen in film and TV show such as Legion, Queen of Swords, Deadliest Warrior, Dragon Ball Z, Joana Hex and many more.

The desire to make fully functional bladed weapons was a natural progression and Baker Blades was created.

Over the past 12 years David’s career has brought him back i n front of the camera on show such as More Extreme Marksmen, 101 weapons that Changed the World, Dude What if, Deadliest Warrior and Forged in Fire.
As a Weapons Smith, over the past 12 years, David has made more exotic and ethnocentric weapons than most. And each of those weapons has been put through some of the most grueling tests imaginable.

Now with his new shop in Virginia, David plans to expand his work on bladed weapons and begin teaching classes in blade smithing.

Anthony has created memorable roles in film, television, and theater working projects around the world. Please view a partial list on his IMDB.
His 48 years of bladed and flexible weapons experience allows him to make an equalizing ‘weapon of opportunity’ out of almost anything. Behind the camera he specializes in helping performers, stunt coordinators and directors make the most of their character and story driven action opportunities.
Anthony has been a performer, teacher / trainer and student of bladed arts from around the world for over 45 years and counting. He has a deep knowledge of European weaponry (broadsword, saber, rapier & dagger, small sword, etc), Japanese katana and spear (Shinkendo 2nd Degree Black Belt and Level 3 Instructor) and Filipino double weapon and knife arts (10 years training with Guro Dan Inosanto), staff, spear, lance and archery, and he does them all from horseback.
Yuen Woo Ping flew him to Shanghai to duel Jet Li with saber vs gin in the FEARLESS and he guest starred twice on HIGHLANDER – THE SERIES in season 3 Blackmail as the Irish Immortal Lyman Kurlow (broadsword vs katana) and in season 5 Duende as the Spanish Swordmaster Ottavio Conssone. Duende was written for Anthony and allowed him to introduce the unique Mysterious Circle system of Spanish rapier fighting to the screen in a classic rapier and dagger duel in the rain created with co-choreographere Braun McAsh and series star Adrian Paul.  View both of these sword fights and others utilizing a variety of bladed weapons combinations on his Sword Reel at https://vimeo.com/124346745 or Visit Anthony’s Website to see him in action as Sword Master, Whip Master, Horse Skills (mounted weaponry), etc.

A bio for Mary De Longis reads like a book on ADHD. A Ph.D. in Cell Biology and Anatomy, Mary spent 16 years in biomedical research before she met Anthony De Longis – the circus she ran away and joined. Bullwhip artist, horsewoman, knife and tomahawk thrower, cowboy action shooter, fight performer, wrangler, ranch manager – she’s a woman of many talents. Mary was a fight double, weapons trainer and coordinator’s assistant on QUEEN OF SWORDS, trained and wrangled horses for 2 seasons of Spike TV’s DEADLIEST WARRIOR, and was stunt double for the feature SIX GUN SAVIOR. She regularly does live performances with bullwhip with Anthony, including the 2014 Del Mar Night Of The Horse celebration, and was the featured Catwoman bullwhip expert for DC Nation. In addition to her many other skills, Mary just earned her Black Belt Hyaku i rank in Shenkendo (Japanese swordsmanship). Mary and Anthony live just north of Los Angeles, CA at Rancho Indalo, along with their 4 horses and 2 dogs. They offer weapons training (bullwhip, swords, knives, guns, archery, knife/tomahawk throwing), extreme trail riding, fine dining and relaxing evenings at the ranch. For more information, visit http://www.delongis.com/indalo/

Jack Dagger: The King of Fling is a world renowned knife throwing comedian and Living Legend (according to the International Knife Throwers Hall of Fame), having performed over 2000 live shows in eight different countries.

Jack was one of People magazine’s Sexiest Men Alive. He’s worked with Conan O’Brien (on The Tonight Show), Nicole Kidman, Adam Sandler, Tony Shaloub, David Boreanaz and Emily Deschanel. He was featured on History Channel’s ‘More Extreme Marksmen’, all five seasons of TOP SHOT as the world’s most accurate marksman and expert in the field of knife throwing, and ‘Stan Lee’s Superhuman’ performing seemingly impossible feats of accuracy, garnering him the scientifically measured and confirmed title of Superhuman.

Jack has also appeared in Vogue Italia with supermodel Karen Elson, on the MTV Movie Awards, in the Britney Spears “Circus” music video, on Good Day LA, The Learning Channel, and has been featured on both Japanese and Greek television. In a recent interview, Michael J. Bainton (the executive director of the International Knife Throwers Hall of Fame) said, “I am continuously amazed by his precision marksmanship and his ability to entertain an audience. He is the most accurate knife thrower in the world at this time, and constantly raises the standards by which other knife throwers are measured in the entertainment field. “Although Jack Dagger has retired from competition, he continues to support the expansion of knife throwing as a fun, safe, confidence-building exercise for the general public. He continues to join me and my students at the Alamo to help raise funds for its preservation. Throughout the day he keeps the crowds in stitches with his quick wit and attention to detail. We could use more people like Jack Dagger.” Jack continues to perform in TV/Film, corporate/trade show environments, Renaissance Faires, Street (Busker) Festivals, and Fringe Festivals all around the world. Originally from Louisiana, Jack now lives in Los Angeles with his beautiful wife Amy, and their son Jack Arthur.

Thomas Potter is an ex soldier who served with the PPCLI for 8 years, mostly in reconnaissance. Upon release from the military he started working in film with the goal to be a stunt performer. Along the way he discovered acting and auditioned for, and was accepted by the American Academy of Dramatic Arts. Completing the program at the Pasadena campus in 1996. As well as being a performer he is also the film and stage combat instructor for Blood and Iron Martial Arts. A historical European martial arts school specializing in edged weapons and some hand to hand techniques. He is also a weapons and tactics trainer and advisor for films such as Halo 4: Forward Unto Dawn, Falling Skies, The Whispers, The Killing (Full Season), Dead Rising, and a variety of TV shows. Also, he’s done stunts recently on Arrow and The Whispers.

Most recently Thomas is the Military Tech Advisor for War for the Planet of the Apes (2017), Lead Military Advisor for The Predator (2018), and military advisor for Shogun (2022)! For more details see http://www.imdb.com/name/nm1340564/ 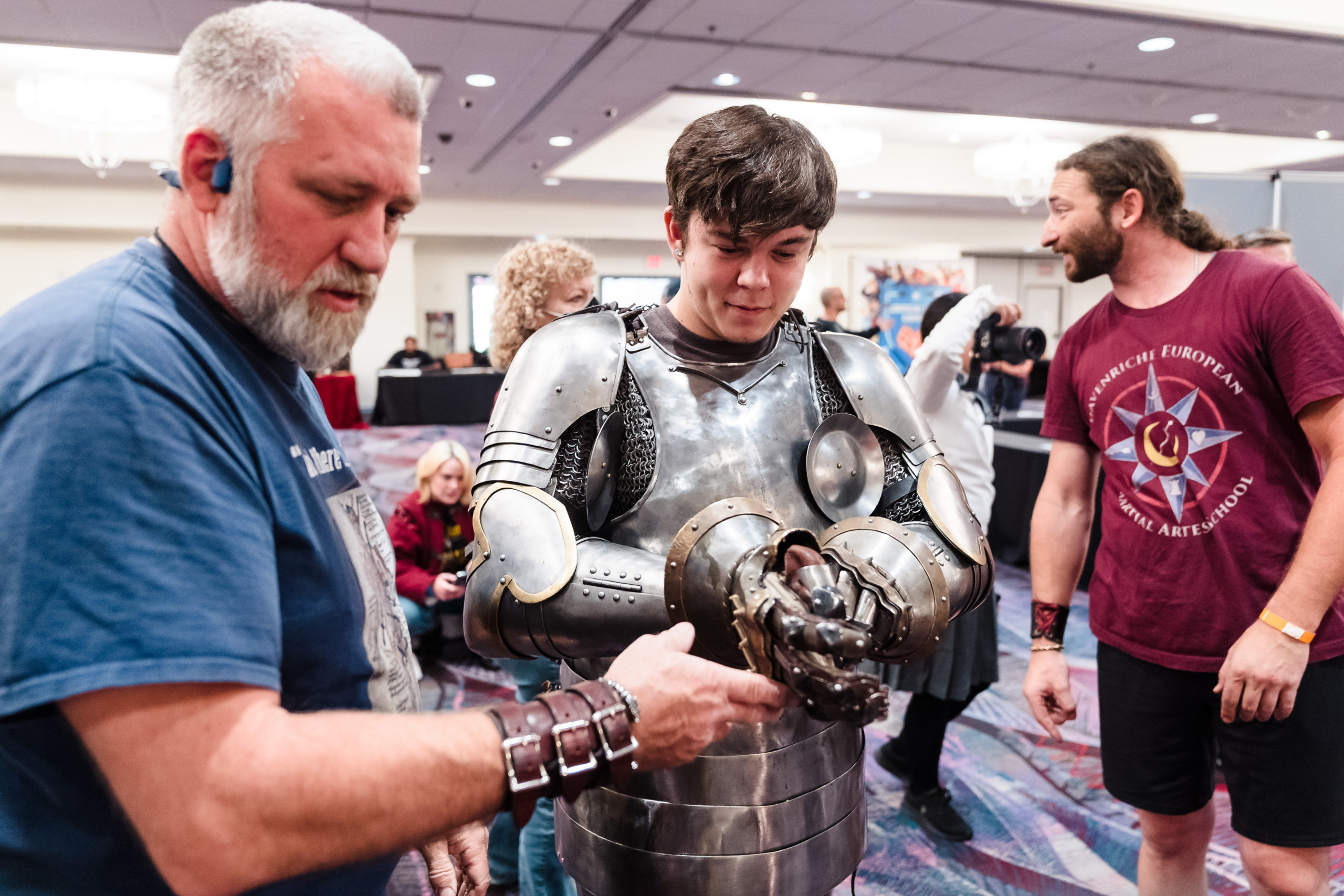 Gloves on, swords up.

Register today and be part of the action.
Get Tickets